On the 30th of January, the Vietnam Buddhist Sangha has organized the inauguration ceremony, sanctify the biggest Amitabha Buddha statue in Vietnam with the spiritual culture community together at the top of the Fansipan mountain and the great festival day of the Prayer 2018.

Attending the event has the elder monk Thich Tri Tinh, the deputy director of the Prove Council of the Vietnam Buddhist  Sangha with the monks at the manager Council  and more than 500 Buddhist from three regions of the country.

Speaking at the ceremony, the superior Buddhist monk Thich Duc Thien, Vice President, General Secretary of the manager Council of the Vietnam Buddhist Church Central, asserted: In the 21st century, we witnessed at the Fansipan – the highest mountain of  the thousands mountains at the grandiose Hoang Lien Son range, the great life-line of the country, the source of spirituality stream, presenting the Dai Hung Bao temple and the Spiritual cultural community, including the pagodas system such as: the Bao An Thien Tu, the Bich Van Thien Tu, the Kim Son Bao Thang Tu, the Buddha Amitabha Statue, the Avalokitesvara Bodhisattva … to increase the magic spirit world of the grandiose Fansipan. The works has sanctified today will continue to inspire the abundant spiritual resources, bring the peace and contentment to everybody and will further promote the development of Lao Cai.

Despite the cold weather at the top of Fansipan Mountain, the elder monks, the monks and the Buddhist clergy, the buddhist were quiet-seeking, pray to Buddha, recite the Buddhist scriptures and cutting the inaugurate band of the spiritual cultural buildings group located at the Fansipan peak area (Sapa), included the Kim Son Bao Thang and the largest Amitabha Buddha statue.

The Kim Son Bao Thang was located near the Fansipan peak, it was built at the end of 2015 and completed officially, inaugurated after two years, including the Dai Hung Bao Dien has many buddha statues were wonder artcfacted, gold-plated painting such as three statues: the Tam The Phat, the Thich Ca Mau Ni, the Quan Am Chuan De has thousand ears thousand eyes, the Di Lac Buddha statue, the Muc Lien-Dia Tang … the most special at the Kim Son Bao Thang has the Amitabha Buddha statue is 21.5m high, has casted by bronze. This is the highest bronze Buddha statue of Vietnam at this time. 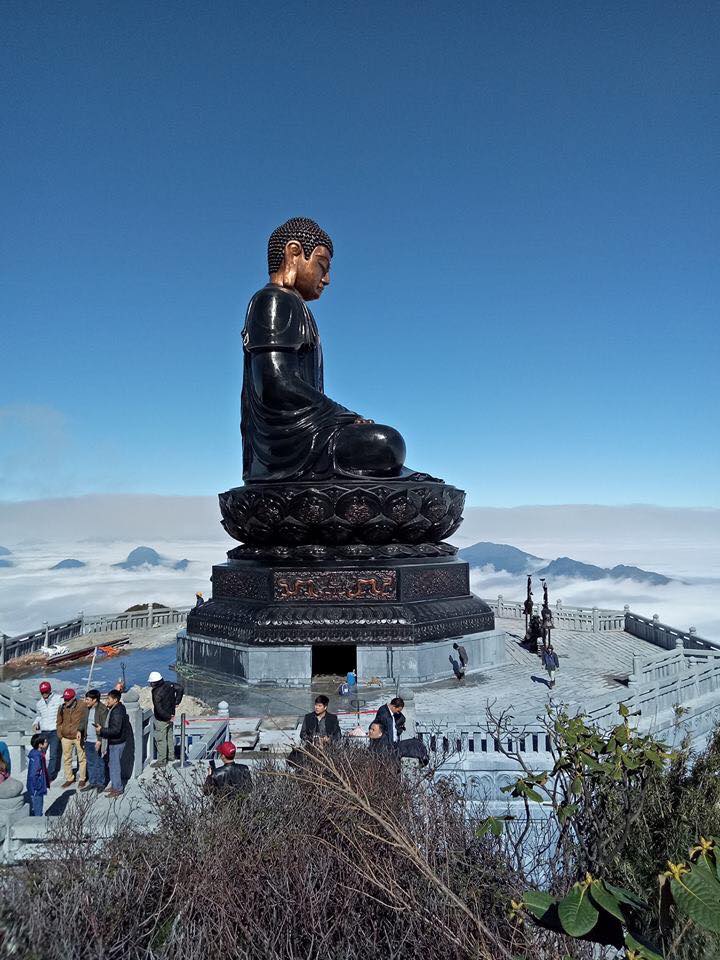 Sharing about  this special spiritual culture community, the professor – architect Hoang Dao Kinh, the designer of the project, affirmed: “In the history of Buddhism, Vietnam has never built the grandiose spiritual works like that at the tops as Fansipan and especially in the full of obstacles and difficult of access mountain conditions, harsh climate, a lot of rain, high humidity, strong winds, frost. The spiritual works group are built on the principle of respecting and minimizing the interference of the nature, attach to the nature and whole standing in the nature. The construction converge the quintessence of the Vietnamese wooden pagoda architecture from the 15th and 16th centuries following the wood style, using the natural materials, the tile is the ancient restored tile also. The decorative details of the angle roof was taken from the Thang Long bastion.

After sanctify officially, the spiritual cultural community at the top of Fansipan (Sa Pa) is always open to welcome the Buddhist faithful, the visitors come to worship, prayer for peace.